If you guessed 144, you may be on to something we call the Fibonacci numbers, after a mathematician who lived about 1200 A.D..

The Fibonacci numbers are generally defined this way: given the two latest Fibonacci numbers, create the next (and newest) Fibonacci by adding them together. So 1+1=2, 1+2=3, 2+3=5, etc. We explain this all mathematically via the recursive algorithm that follows:

These numbers appear all over in nature: in pinecones, pineapples, artichokes, pussywillows, daisys, etc.

But they started out as pairs of immortal bunnies, which mature in a month, and then produce a single new pair every month thereafter (that's the way Fibonacci began studying them, it seems). We start out on the left, in the diagram which follows, and watch a single baby bunny pair mature, and then begin to populate the world with bunny pairs: 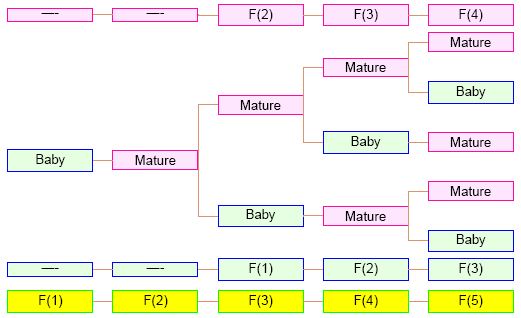 This diagram illustrates why the recursive algorithm works:

every natural number is either

Can we justify this?