How do we know how the Egyptians did math?

For a long time the mysterious Egyptian hieroglyphic language befuddled scholars, and guarded the secrets of the Egyptians. 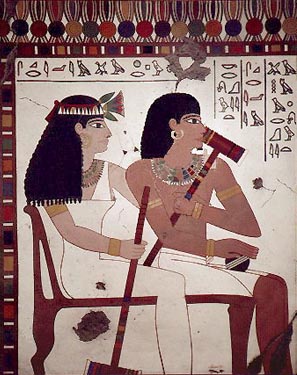 Then the Rosetta Stone was discovered and a quarter-century later deciphered, and provided the means for scientists to begin to understand exactly what the Egyptians had understood and discovered in ancient times:

is a simple outgrowth of the Binary Card Trick. Multiplication is accomplished through binary decomposition (successive doublings). Consider, for example, 57*63. We'll double the larger of the two numbers, and then select the rows that add up to the smaller:

Division is also carried out in binary, but fractions make it more interesting:

The Egyptians restricted themselves to the so-called "unit fractions", which are fractions of the form 1/m: unit fraction table, which is found on the Rhind Papyrus (which dates to around 1650 BCE).

But they didn't restrict themselves to "halving", as our next example shows. Divide 6 by 7: